There’s Meaning Behind the Screaming 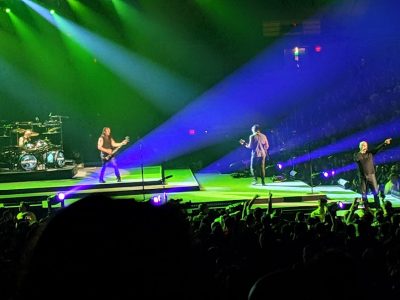 This past week, I was fortunate enough to go and see two of my favorite bands play.  It was so exciting!  Three Days Grace and Disturbed took the stage and rocked the arena!  I was on my feet, singing and screaming the entire time.

Man.  Does hard rock music do it for me! 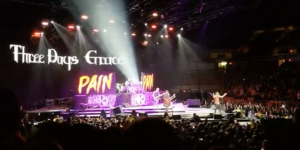 It’s something that surprises many people when they find out how much I love hard rock music.  But I do!  The music is powerful – full of so many emotions: excitement, adrenaline (I’m calling that an emotion for this), sadness, yearning, anger, confusion, and even peace.  Yes…  I said peace.

This concert certainly contained all of the above.

And so, I had to share the experience with you, because going to this concert in particular made me realize that we are ALL feeling this change in society’s social-emotional needs.  (Of COURSE I had to relate this concert back to education. 😉 )

The concert featured Disturbed, a band whose first big album came out in 2000 with some pretty hard core songs that, well… let’s just say I wouldn’t choose to play in my classroom.

This concert, though showed a much more mature band that has been around and seen a few things.  Not to mention they truly do understand the impact they can have on their fans.

And they are using that for some benefit!

In fact, at one point during the concert, the lead singer called up a fan from the audience and read a letter she had written to the band.  In it, she stated how their music affected her and helped her through some very hard times.  They commended her for working through her struggles, thanked her for allowing them to be part of her journey and encouraged her to keep on fighting.  Then, she got to sit beneath the drum set while they played their next song, The Light.

The lead singer, David Draiman describes the meaning of this song this way:

“The message is one of positivity. Most people are quite apprehensive about the “dark” periods, and experiences of their lives. However, sometimes those dark periods of time are a necessary path we must take in order to finally see ‘the light’ so to speak.”

Here are some the lyrics from The Light:

Like an unsung melody
The truth is waiting there for you to find it
It’s not a blight, but a remedy
A clear reminder of how it began
Deep inside your memory
You turned away as you struggled to find it
You heard it call as you walked away
A voice of calm from within the silence
And for what seemed an eternity
You waited, hoping it would call out again

You need strengthening, toughening
It takes a bit of darkness to rekindle the fire burning in you
Ignite the fire within you

You see Disturbed’s music has made a transformational journey from pain and wrath to something much more positive.

Their newest album, Evolution is made up of some songs that really speak to the social and emotional struggles of people, giving strength and hope.  Really.

Check out these excerpts:

From A Reason to Fight:

From Hold On To Memories:

And Disturbed is not the only hard rock or heavy metal band that is speaking to those who feel pain or feel lost.  Many bands are using their music to speak their minds and heal the masses through their music. 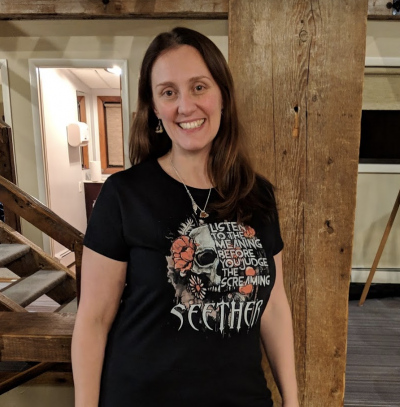 Can you read my shirt?

During the last SEAL retreat 2019, one workshop I led was called, The Meaning Behind the Screaming.  It was a workshop that I had been thinking of conducting for over a year.  I couldn’t wait for the opportunity to share my love of hard rock with the SEAL retreaters, hoping that they would see this genre of music in a new light.

To do this, I asked small groups of teachers to take a recording of one the songs in my playlist, listen to it, study the lyrics and discuss what the music meant: to them, to the artists, to other people who would listen to the song.

From their responses at the retreat and in writing, I could tell that this experience was well worth it!

“Our group listened to “Someone Who Cares” by 3 Days Grace. It was heavy but surprisingly vulnerable. In fact, that seemed to be a theme among several of the songs. By the end of the activity, we decided that music can bring out raw, vulnerable emotions that might not have been communicated otherwise.” 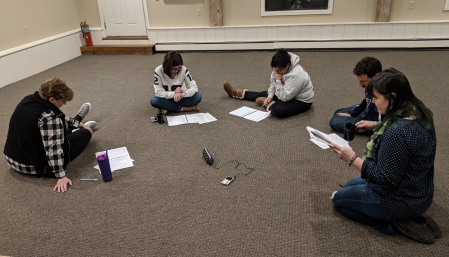 “The first retreat activity was so powerful for me. Just listening, really listening with an open mind helped me to hear things that I wouldn’t have before. Reading the lyrics of music was incredible but then hearing the tone and feelings conveyed through the music really helped to understand what needed to be heard. What an amazing activity! I have learned to listen, hear, and understand on a deeper level.”

If you are interested in listening to some of the songs we studied, here is a link to the playlist on Spotify:

The Meaning Behind the Screaming playlist

At the Evolution concert, I was touched that the band recognized the needs for their 1000s of fans, asking them to speak up if they are feeling low and even shining these numbers on their mega screen for people to notice and use: 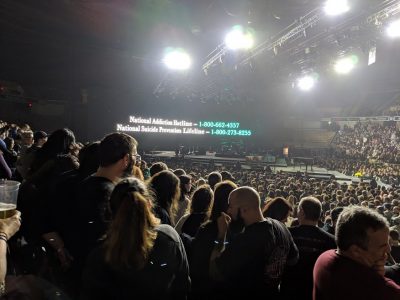 These topics are real and we need to be aware of how they affect our students, ourselves and others around us.

You never know, hearing these messages of hope in the form of a song could be just what you or your students need to make a difference in knowing they are not alone.  That there are people who love them.  And there is a way to get support.  No matter what they are going through!

So, when you hear the screaming in the music, don’t disregard it, listen.  There is true meaning in those lyrics.

Music has such power for so many reasons.  Let’s use it!

“Meaning Behind the Screaming” Playlist: https://open.spotify.com/playlist/5yuYn22fHy0qTLHt24whyE

Find lyrics and videos and the meanings behind of all Disturbed’s songs here: http://disturbedpedia.com/