Music to Learn By – Soundtracking My Classroom

In my last post, Music Sets the Tone, I described my intention of using music more in my classroom as a backdrop to all our activities.

It’s been over a week that I have been faithfully soundtracking my classroom!  I have committed to teaching while some sort of music is constantly playing and it is quite successful!

Each section of the day has a different type of music so far to fit the needs of my classroom of learners:

Each morning I have played some sort of upbeat or seasonal music.  For the week leading up to Christmas, I used jazzy Christmas music.  This week I started with some jazz and then switched to music recorded by Canadians (because we are studying Canada, of course!)  Next week I’ll start playing some music from Mexico.  The morning is a great time to play around with different genres that will welcome the students to a new day. 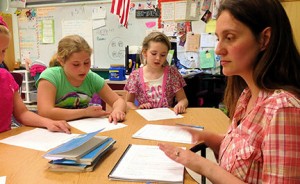 The majority of the day, we listen to a slow, droning type of music.  It has no lyrics, no rhythm and really no melody either.  The track I prefer so far is “Study Music Alpha Waves” found on YouTube.  I have it playing while I’m teaching a lesson, while I’m giving instructions and while the students work on assignments.  This particular track lasts over 3 hours and has no true beginning or end, and it truly creates an atmosphere of constant peace.

I especially like that when I feel my students need a brain break or a chance to take some deep breaths, the music automatically sets the tone without my asking them to quiet down.  They just stand still and feel it!  It’s like I have my own yoga studio in my classroom at the drop of a hat.

Because I’m an elementary classroom teacher, I build in time each day for students to read silently.  I, for one, am not able to read while traditional music is playing, that is, music that has rhythm or melody or especially lyrics.  For a change of pace during this time, I have tried other forms of music and sound.

During our silent reading time, I have been playing nature sounds.  These have ranged from water sound to birds chirping.  I’m finding that playing something that has a sound come out of nowhere is not very effective and can startle a reader out of their reading zone.  Having just water flowing in the background is kind of boring, so I’ve been layering sounds, playing the water AND the birds.  I’ve been able to do this by opening two tabs in my browser and pressing play for two different YouTube videos.  I’ve been using Bluebell Wood Birdsong and Mountain Stream together.  There are other videos that combine the two, but I like being able to adjust the volumes of the two tracks together.  (Control freak!) 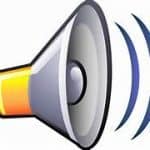 Finding the right genre can be fun.  It’s been interesting trying to match music and sounds to my ultimate purpose.  At first I thought maybe I would go the classical, instrumental route, but I quickly changed my mind for a couple of reasons.  For one, that music was composed to be actively listened to, not ignored.  Another reason is that some of the music can quickly get distracting if you are trying to learn.  For example, playing a Beethoven symphony would be a mistake if, all of a sudden the trumpets came in with triumph.  Even trying for the “Mozart Effect” could backfire if you don’t select the right piece.  If there is a sudden change in rhythm or volume, it could throw the class off.  Most of the music I have been using is composed FOR relaxation and focus.

Volume is also something to consider and an easy one to adjust to your needs.  Again, the music I’ve been using is pretty much the same dynamic throughout: no quiet moments or loud crescendos.  A sudden change in volume is hard to recover from if you are trying to keep a classroom of students on task. 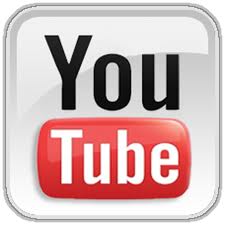 I’ve shared with you some of the music I have been using.  You can get lost in the many possibilities.  I’ve mainly been using YouTube because my computer (which has access to it) is hooked up to a projector with a centrally located speaker.  I do not show the video that accompanies the music.  Instead I have a PowerPoint slide show projecting a blank slide.

One thing you have to look out for with YouTube is the ads.  They are a nuisance anyway and they come on quickly and quite loudly.  Usually, there is only one at the beginning and you can mute the audio and/or video while it’s on.

The biggest concern, though is that you don’t get a bad ad.  One time, years ago, I was playing a science video for my class using YouTube and in the middle of the show a bra commercial came on.  YIKES!  Thankfully, I was quick on the keyboard and at least was able to switch screens for the duration of the ad.

The other thing about ads is that some videos have ads playing within the video.  You can tell right away which ones those will be by checking the progress bar at the bottom of the video.  If there are yellow spots distributed across the bar, chances are you will get ads when you don’t want them.

As a backup plan to YouTube, I do have my phone and CD player.  Years ago someone gave me a CD of meditation music that I have used off and on. 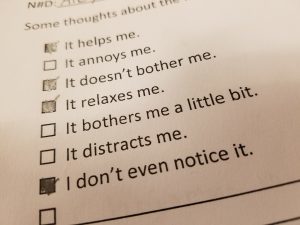 You probably have guessed that I have found using music in this way very beneficial, but you’re probably more curious about what the kids think. Overall, they have a very positive response to what we are doing.  I handed out a survey and asked them to check off their initial reactions to the music and sound in our room.  They could check off whatever they wanted and as many things as they felt applied to them.  There was also an option to write in an alternate response.

Overall, “It relaxes me” and “It helps me.” were at the top of the list.

Here is a (very high tech) graph of how they responded: 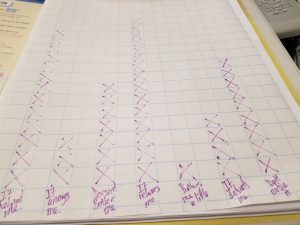 In addition, some students wrote a comment about their experience:

“It’s helping me stay calm.  It helps me think.”

“I really like the music you play.  It keeps me relaxed and focused.”

Of course there are a couple students who are not into the entire experience:

“You can keep playing the music, but quieter music and no more nature sounds.  I don’t like it.”

And others who are good at defining thus far that they prefer music to ambient (nature) sounds.

“I don’t like the nature sounds.  The jazzy music is relaxing.”

And one student said this:

“Sometimes it makes me sad.  Sometimes I love it.”

Which brings me to another point of bringing up emotions.  Sometimes, unexpectedly, an emotion is triggered in a student (or anyone, really) when a certain song comes on, or a mood is amplified through sound.  This is something I will have to look out for in the future.  Of course I’ve already been weary of not exciting students too much with upbeat pop music or rock and roll.  I also need to make sure I keep an even keel of emotion in the classroom.

I love playing the role of a DJ and soundtracking my classroom.  I plan to continue using music and sound throughout the day and experimenting with a variety of genres as well as silence.  I’m hoping to create opportunities where students are able to think about their own experiences with music and sound and are able to understand what works for them as learners.

Music Sets the Tone
The Arts and Trauma