by guest blogger | Arts Education and Integration, STEAM and Technology in the Classroom | 0 comments

Today I’d like to introduce you to a fantastic app and great new game, Blendoku.  It’s a fun way to play with colors and learn about how they can mix together and are related to one another.  My first time playing, I was hooked and shortly after, my 7-year-old son found it on my phone and was mesmerized. I’m happy that one of the creators of the game, Yeong Hao Han, has provided us with this post explaining more about the game and how it came to be.  Enjoy!  ~EMP 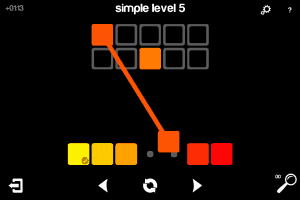 My friend and I recently released a free game for iPhone/iPad/Android devices called Blendoku.  It’s a simple game similar to crossword puzzles or Sudoku, with the intent of passively teaching players color mixing and theory.  In Blendoku, players are organizing colors by transitions between colors.  This post might have some terms you’re not familiar with but if you play a bit of Blendoku, you’ll pick up the concepts without even knowing it.

We were all taught in grade school that there are three primary colors: Red, Yellow, and Blue.  With these three colors, a person can mix the tertiary colors, and then create all other colors of the rainbow.  Unfortunately, this is a pretty rudimentary approach to color and is actually false in some cases.  For instance, one of the rules of color is that mixing colors dulls them out.  If you were to mix blue and yellow paint, the resulting green will never be as vibrant as a green straight from a tube of paint.

In the simplest Blendoku puzzles, a player is given two color swatches, along with a half dozen swatches in between.  The player then has to organize the swatches to move in a progressive manner.  By doing so, players can learn color temperature, value, color relativity, as well as some analytical thinking along the way.

Some things that Blendoku teaches: 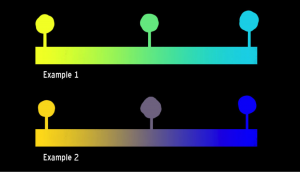 Both examples have a yellow and a blue, but the results are completely different. 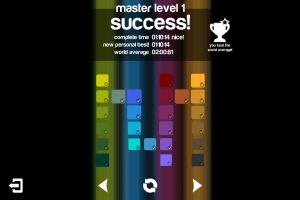 There are other properties of color that players can learn from playing the game, such as limited palettes, saturation levels, and more.  That being said, Blendoku is by no means a perfect game, but I believe it’s a good introduction for students in the visual field.  The game is simple enough for children, yet thousands of adults love the game as well.  Just check out the reviews for the game on the Apple App store and the Google Play store.

For those who don’t have the means of getting Blendoku to their students, there are other options for learning color mixing traditionally.  One of the simplest ways is to limit the amount of colors available to students.  This forces them to mix their colors and discover what happens when certain colors are mixed.  Thanks everybody, happy mixing!

Yeong Hao Han has worked in the video game industry as an artist and game designer for the past 7 years at companies such as Electronic Arts, Pandemic Studios, and Wizards of the Coast.  He graduated from Art Center College of Art and Design and has taught at the Art Institute.  Currently, he works at Lonely Few, a video game studio he co-founded with Rod Green.

The Inspired Classroom and Elizabeth Peterson are in no way getting compensated for posting this article about Blendoku.  It is simply a great game.  Go get it for yourself and try it!

5 Poetic Forms That Are Perfect for the Classroom
Creative Writing: 5 Classic Poems That Will Inspire Your Students