Mistakes and Passion – A Lesson from Beethoven 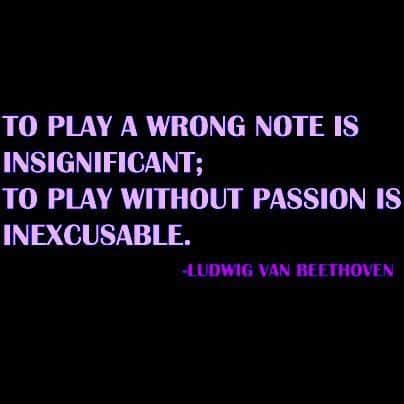 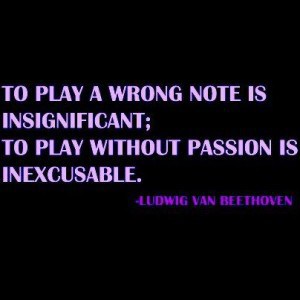 I remember my years studying the piano.  It had to have been my grandfather who first told me of these wise words from Beethoven.  He, an admirer of the man and lover of his music, had read every biography, seen every documentary, listened intently to every composition and traveled to Germany to walk in his footsteps.  So it was no wonder why my grandfather was such an intricate part of my musical upbringing.

Often, my grandfather would ask me to play something for him when he was at my house for a family gathering.  He would ask it like an innocent schoolboy waiting for a smile and a yes.  His dutiful granddaughter would always oblige.

There was one time when I had just finished playing a piece for him on our brown, Baldwin spinet – the first movement of the Moonlight Sonata.  I was studying it as a freshman in high school in preparation to complete the entire sonata for my senior recital.  I knew it wasn’t a perfect performance – a few missed notes – I was still learning it after all and had hardly learned the whole movement.  When I was done, I shyly looked up from the keys to see my grandfather staring at me with pride in his posture and tears in his eyes.  I didn’t know what to think.  I wondered if he would criticize my playing – the missed notes, the less than precise rhythm…but instead, he praised my playing.

“How did you know how to play that so perfectly?  You had so much expression.  That was exactly how Beethoven would want it played.”

I was shocked and delighted, but a little confused.

“But, Grandpa, I messed up so many notes.”

“Anyone can get the right notes.  You will get those with practice.  It’s the expression you put into it that is more important.  Beethoven knew this.  He would never mind if a pupil played a wrong note, but if one played without passion, he would rap his fingers.”

I knew I liked that idea right away.  Practice can certainly make perfect, but what really matters is what you put into it.

And isn’t this the truth with so much in life and learning?  A student who can do all the calculations and answer all the multiple choice questions is great, but a students who goes all out and feeds his or her curiosity to learn – that is worth celebrating!

Those that are most inspiring learners.  Those who go all out and try new things because they have that passion inside of them.  They are not afraid of mistakes.  They understand that mistakes are part of learning, growing; they are insignificant.

I can picture my seven year old son, Zach as he works and builds with his Legos.  Talk about passion and focus.  As he builds a new design, he figures out what works, what doesn’t and then as he turns the building into play, he uses his new designs with fervor.  If a piece of his rapid shooter falls off or if his gateway to the secret chambers suddenly comes apart, he doesn’t get frustrated.  He presses it back together and moves on with every sound effect he can muster.

When Beethoven gave me a lesson he was, I might say, unusually patient.  Thus he often would have me repeat a single number ten or more times.  In the Variations in F major, Opus 34, I was obliged to repeat almost the entire final Adagio variation seventeen times; and even then he was not satisfied with the expression in the small cadenza, though I thought I played it as well as he did.  That day I had well-nigh a two hour lesson.  When I left out something in a passage, a note or a skip, which in many cases he wished to have specially emphasized, or struck a wrong key, he seldom said anything; yet when I was at fault with regard to the expression, the crescendo or matters of that kind, or in the character of the piece, he would grow angry.  Mistakes of the other kind, he said were due to chance; but these last resulted from want of knowledge, feeling or attention.  He himself often made mistakes of the first kind, even playing in public.”

So – play, work, teach with passion today regardless of the mistakes you may make along the way.  Learn from them, of course, but don’t lose that passion and expression that adds to the character of what you do.

Thank you to my cousin,  Mary Petrone  who shared this pictured quote on Facebook from The Musicians Rock Network‘s photo and inspired this post.