Motivational Stunts – Can a Little Laugh Go a Long Way in Education? 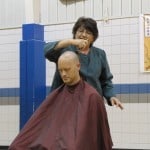 I remember working for a principal that would promise to climb a rock wall and touch the gym ceiling if the students read a set number of minutes.  Then there was a teacher I taught with who joined the rest of the basketball team in shaving his head in front of the school to raise money for a tsunami relief fund raiser.  Teachers do some crazy things and today we welcome back Louise Blake to tell us more about these motivational stunts in education.  ~EMP

Teaching is a highly-skilled occupation, requiring years of training and an uncompromisingly professional image. But creativity is also key to getting the most out of pupils, and a new teaching trend to creatively motivate students is through ‘pranks’ and stunts.

Immensely popular in the U.S., the trials and public humiliation teachers and principals are willing to undergo vary both in style and magnitude – from getting duct-taped to the gym for charity to roaming the halls in rooster suits, serving ice cream or shaving off their hair. All in the name of getting the most out of their pupils, of course.

But while these creative stunts are undoubtedly great for making local headlines, how much do they benefit the students educationally? Let’s have a look.

Even if you’re going down the route of employing motivational stunts in the classroom, educators still need to have a specific cause or objective in mind.

But there also seems to be a kind of an unwritten rule that asks for these causes to be as original and ambitious as the stunt itself. Also, as we all know, there’s no such thing as a free meal, so, before committing to a freshly-styled Mohawk, the teacher in question usually needs to make sure they’re getting something in return – which usually isn’t a hairdresser appointment.

For that reason, the element of betting (or daring) comes in, as the teacher dares his students to improve their grades to a certain extent or bets on their inability to each read a book within a week.

The kids’ motivation supposedly comes from the challenge of proving their tutors wrong, usually even surpassing all expectations, be it improved grades, extra schoolwork or charity work, they’ve put their best efforts towards.

In the Beak of Benefits

School stunts are initially meant for bringing some fun into the learning process and livening up the school routine. But they also have a deeper, psychological importance.

For teachers, the main benefit comes from dismissing the fear of humiliation as the main enjoyment for their pupils doesn’t come from abusing their teachers but from seeing them as more approachable and normal –as real human beings that they initially are. The more comfortable children feel with the teacher, the easier they are to teach. It has to be a fully reciprocal process to reap educational rewards for both educator and student.

As well as that, motivational stunts are claimed to be a great way of showing the students you care and believe in them. In the wider context, it also sends a positive message to the parents – they are often as excited by these little shows and stunts as the children.

However, regardless of the many reasons motivational stunts are deemed good for, the primary factor with which to measure them is the success of the cause – and many teachers are fully supporting and praising the effectiveness of this more unorthodox method of teaching.

In 2009, for example, a whole class of Codington Elementary School, North Carolina, succeeded in passing all three end-of-year-tests in Reading, Math and Science at the rate of 90%. And why did they work so hard? So they could see their teacher dress up in a chicken suit and serve ice cream.

Or what about the class from Farmington Mills, Michigan, who shaved the head of the school’s Assistant Principal because the number of failed grades dropped by 88%?

These are just a few ways that this more unconventional and out-of-the-box thinking has worked for teachers in the classroom.

Can you think of any other examples or benefits incorporating motivating stunts can have within the educational system? Share your thoughts in the comments below.

Bio: Louise Blake is a new mum with an interest in making sure her son has the best possible education. She writes about custom made stickers of achievement for School Stickers.