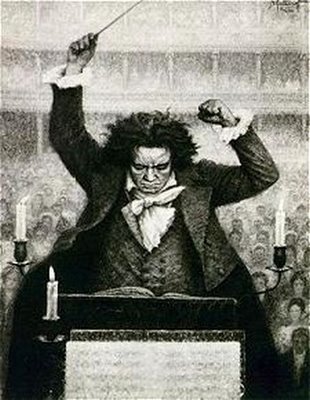 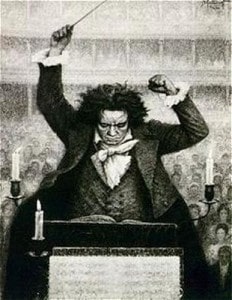 Not all musical pieces are meant to be heard as stories, but often they can be.  Just the other day, my students did a quick write using Beethoven’s Coriolan Overture to create a short story.

All this month, I love to do Beethoven-based lessons with my class.  We listen to his music, study his life and integrate musical concepts with other content areas, especially literacy.  Over the past few days, my students and I have listened to the piece, visualized the main character and setting and begun to develop a plot according to the clues in the music.

This particular piece of music is based on Heinrich Joseph von Collin‘s story about the Roman leader Gaius Marcius  Coriolanus, but the students are encouraged to interpret the music and discover their own characters, setting and plot.  In fact, I usually don’t tell them the background story of the piece until we have listened a few times.

This piece is quite long.  It is over 8 minutes, too long for a class to listen to this early in the year.  (They haven’t built up that kind of listening stamina yet.)  However, it’s important for the students to listen to the beginning, middle and end of the piece to get the full effect of the story in the music.  What I did was have them listen to the first 3 minutes and then the last 2 minutes.  This way they get to hear how Beethoven ended his piece.  It is quite a wonderful ending and the interpretations students have are great.

To make this a quick write, I had students create stories in a poetic way using a story pyramid framework similar to this:

Here are examples of what my fourth graders came up with.

She ran away again.

She got lost at night.

It’s raining and lightning is shooting!

Her parents don’t know where she is.

Her parents find her at last. Yay!

He almost gets himself killed.

Finally gets to see some light and

He finds his way out of there.

Another example of a great piece of music that tells a story is the Egmont Overture.  Beethoven’s 3rd Symphony tells a tale as well.  It is the tale of Napoleon’s heroism during the French Revolution.  (You may be interested in this wonderful picture book, The Heroic Symphony by Anna Harwell Celenza that tells the interesting back story behind the composing of this symphony. )

Above all, Beethoven’s 5th Symphony is quite possibly the best example of B, M, and E.  The beginning is not only very well recognized, it captures  your interest and holds your attention.  The middle is exciting and complex as it takes the themes from the beginning of the piece and develops them in many different ways.  The ending is truly amazing, building up more tension and excitement and when the piece is over, you are left with a feeling of exuberance (or maybe exhaustion).

Beethoven has many pieces that illustrate great stories with music.  All you have to do it take the time to actively listen for those story elements and when you do, the sky’s the limit.

Here’s a great Beethoven playlist on Spotify to get you started.

The Clues in Music
The Benefit of Music in Education