This past week was the second annual Teacher Art Retreat and it was a “wonderful three days!” as one of the participant wrote.  We sang, danced, drew, glued, told stories, listened to music, drummed, looked for math in nature, acted, ate, relaxed, played with rocks, the list goes on…

One of the coolest things we did, though was during our focus project time.  Last year we created Hinged Box Books.

This year we composed a song; 12 adults collaborated on one song.  Talk about going through the writing process.  We decided on a theme, brainstormed words and ideas we wanted to focus on, wrote lines of lyrics, but the lyrics together, and then worked on the music.  We decided on a genre or feel for the music, listened to music to get inspired, moved, played and then tried out a bunch of melodies.  In the end we came up with music that had two different feels but seemed to really work together.

Debbie leads us in singing and recording our awesome, original song! 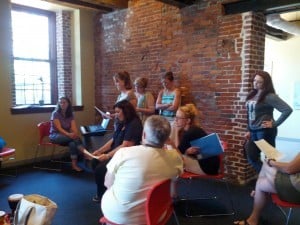 Teachers study and discuss the lyrics and music before recording.

I’m excited to share the final product with you!

The song is called Create and Celebrate!

It’s an anthem for educators everywhere, exclaiming the possibilities and promise of arts integration!

Are the Arts Fluff?
Classroom Ideas for Just One Drum