Creativity at the Google Event

Last night I felt like such a VIP!  I was one of only 300 people to attend the Google event in Philly at the Museum of Natural History during the ISTE conference.  Now 300 people may sound like a lot, but out of the nearly 11,000 people here at the conference, I’d say that’s pretty exclusive!  😉  hehe… (Actually it’s because I signed up early and didn’t procrastinate this time!) 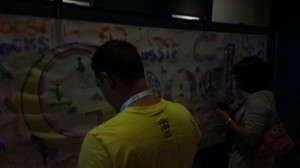 Regardless, anyone who was there, would have felt special because of the type of party they put on.  It’s not just about the fancy, way cool food that was passed around  (or the drinks!), but because of the little things – the creative things!

They set the scene right from the beginning.  After you checked in, you were given a blank name tag and are were told to decorate it.  Behind the check in station were high top tables filled with markers, stickers and stamps at our disposal, and adults (all educators) stood there excitedly designing their own badge.

After grabbing a drink from the open bar, we were free to roam the dinosaur bones and the preserved wild-life, but if you walked just a little further (before the butterfly sanctuary) you saw a display that acted like an open invitation to create – two large murals with the Google lettering and tables at each end covered with markers, stickers and lots of paints.  People gravitated to it and added their own “2 cents”  of color as they made designs in the letters or decorated around them or threw on some splashes of paint here and there.

At the heart of the event was the ever present rhythm coming from the DJ who kept spinning vinyl throughout.  There were a lot of heads bobbing as they walked from display to display and a few hands in the air as a small group shuffled through the dance floor.  Eventually, people started to dance and by about half way through, it was a full out dance party!  YAY!

Now these may seem like small things, but those are the ones that are the most effective.  I mean, how often do we get asked to design something like a name tag or create a community piece of art work?  When was the last time you went dancing or allowed yourself to get a little crazy moving to the music?  (Just the other day I was saying to one of my girlfriends that it is due time to go out dancin’!)

Point is that we need time to create in all forms; time to let loose and poke a few boxes (or a few fingers in the air to a pumpin’ rhythm.)

I hope you are able to do some creative things soon: small or large.  We owe it to our creative spirits!

Want to get your creative juices flowing this summer?  Join us for the Teacher Art Retreat this summer!  Super Early Bird registration ends July1st.