I had to “go”, so I put down my paintbrush, excused myself from the table and found the bathroom.   It was small, but cute, and of course it was all painted.  We were, after all on a Teacher Field Trip in a pottery shop, painting pottery to be fired and brought home.  The mural amused me for the time I was in the little room and as I washed and dried my hands I noticed a small hand-painted sign hanging and it said,

There are no mistakes in art, just surprise ideas. 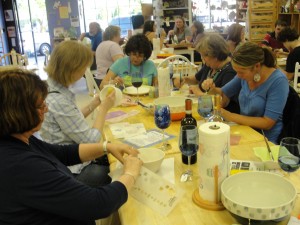 Immediately the quote resonated with me.  Mistakes!  We teachers were claiming to make them while we painted our pottery.  Yet we kept going; we worked with them.   And, if I do say so myself, our pottery came out quite nicely!

How many times have we seen a student making a “mistake” and throwing what they’ve done away only to start over?   (How many times have we been guilty of that ourselves?)  It can be truly amazing, though to see what happens when you don’t give up on something because of a small mistake, but instead work with it.

This is a shade different from the lessons we learn from our mistakes.  Like when we take take a wrong turn, use the wrong ingredient or wait until the last minute.  Those are the types where you might say, “I’ll never do THAT again!”

Instead, this is the type of mistake where you can be more reflective and instead of getting frustrated wanting to give up, you persevere.  This is one of the lessons you can learn through the arts.

Last year, I had my fourth graders do an integrated art project during our first-ever Studio Day.  Students were to create a folder to house a poem they wrote for their mothers for Mothers’ Day.  They were to use paint, sponges and templates to create a Frieze Pattern on their folders as part of their decoration.   During that time, one of my boys started over three times.  He kept “making mistakes.”

When I figured out what was going on, I intervened and said, “What are you doing?”

“I keep messing up.  I keep making splotches on my paper and it looks ugly!”

“Listen,” I said pulling his papers out of the recycling, “You need to pick one of these and work with it.  You never know, this mistake might be just what your painting needed.”

Reluctantly, he took one back to his table and started working.  He did work with it and in fact, it came out quite nice.  I showed him ways to make splotches into something by adding something here and doing something there.  He ran with the idea and others in the class took notice.

By the time we were done, the boy was pretty proud of his accomplishments.  He had stuck with it, persevered and worked WITH his mistake instead of giving up.

That’s one of the great things about the arts.  When you give students opportunities to really work with things and make mistakes in a non-threatening atmosphere, they learn to adapt and see things differently.

School Struggling & Shut-Down Learners: The Other Side of the Creative Coin
Artsed in 5