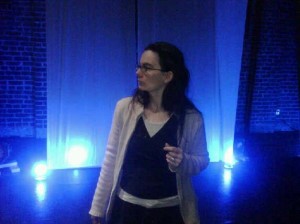 CINDY MARIE JENKINS is a Storyteller & Coach based in Los Angeles. Her stories take the form of fiction, poetry, teaching, theatre, editorials, PR and marketing, advocacy, plays….Cindy now explores interactive guerrilla/street theatre to engage and activate her community and dreams of art integration in education.
Previous community art installations/interactions have been shown at The Barnsdall Gallery, The Courtyard Gallery, the Silver Lake Jubilee and the Children’s Festival of the Arts in Hollywood.

CURRENT: Storyteller for the Friends of Echo Park Library, Chair of Outreach & Representative on The Atwater Village Neighborhood Council, Arts Consultant for Stephen Box for Council District 4 campaign, Associate Artist for The Indy Convergence, Associate Producer for the Directors Lab West, CONTRIBUTING WRITER: Bitter Lemons, Love Atwater, and her Storyteller blog, where you can find folklore related to the soon-to-be-published novel TEN.

PAST: Academy Teaching Associate and Artistic Associate for The Antaeus Company in North Hollywood, where she expanded both the Antaeus Academy for young classical actors and ShakesAlive! the Arts Education Outreach programs; Director of Education for Enrichment Works; Mentor/Director for Virginia Avenue Project, Program Director for Safe Moves: DUI Prevention Theater Program and CTG‘s Speak To Me Program.

Her adaptation of VOICES FROM CHORNOBYL has been produced in different venues around Los Angeles since 2006 as part of the Anniversary Readings Series, an annual international event designed to build awareness and raise money for the residents and children of Chernobyl.  She was invited to be a Key Note Speaker at “Remember Chernobyl,” an Annual Conference for UK & Irish Chernobyl Charities, where the Demo premiered and the VFC Anniversary Readings launched.  The Demo is regularly screened around the world to both fund-raise and recruit host families for children in the affected zone.  In 2009 her adaptation was read in numerous locations around Los Angeles by the original ensemble as well as new casts, including a co-presentation with Deaf West which began the process of translating the play into ASL. Currently pre-planning for the 25th anniversary events in 2011.